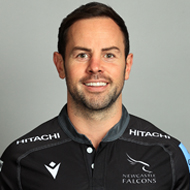 Michael Young made his original debut for Newcastle Falcons in 2008 after playing his junior rugby with hometown side West Hartlepool, and appeared 79 times for the North East side before moving on to Leicester Tigers in 2011. Having spent two seasons at Welford Road, including the Tigers’ Premiership-winning 2012/13 campaign, the 2010 and 2011 Churchill Cup winner then moved on to Bath Rugby where he spent a further two seasons. In February 2015 it was announced that Young would be heading back to his native North East, the former England 7s international returning to the England Saxons fold for their 2016 series win over South Africa A after playing in all but one of Newcastle’s 22 league games that year. His first season back at Kingston Park brought 13 Premiership appearances, scoring a try in the home victory over Harlequins. In 2017-18 Young delivered another supremely consistent campaign, making 12 Premiership starts including a try and a man-of-the-match performance in the away win at Gloucester. He followed that up by featuring strongly in 2018-19, scoring against Gloucester, Bath and Toulon, and standing in to captain the side on occasion. Those obvious leadership qualities contributed to him being awarded the club's co-captaincy for 2019-20, helping the club to promotion before making 11 appearances during the 2020-21 campaign before enduring an injury-affected 2021-22.