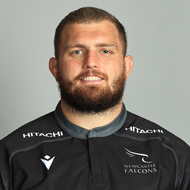 Adam Brocklebank was a late arrival to rugby, only getting into the sport at the age of 16. Originally playing at back row, Brocklebank played his first games for Ormskirk Rugby Club and Mysercough College. After beginning his studies at Durham University Brocklebank was spotted by Newcastle Falcons and represented the club's A-League team in 2014/15 before signing with the Falcons' senior academy the following summer. Now playing as a prop, Brocklebank has to date represented both England Counties U18s and England Students, and made his first team debut for the Falcons during the 2016-17 season. During the 2018-19 season Brocklebank made his Heineken Champions Cup debut, playing in the memorable victories over Toulon and Montpellier. Helping the Falcons to promotion during an unbeaten 2019-20 season, Brocklebank played 12 times during the 2020-21 campaign, following that up with a further 26 outings during 2021-22.