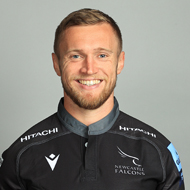 Brett Connon began his rugby career at the age of six with Carlisle RFC and went on to join Newcastle Falcons' junior academy at 15, making his first team debut in October 2016 during a European Challenge Cup tie at Ospreys. The Cumbrian-born fly-half graduated into the club's senior academy on a full-time contract during summer 2015 and went on to make a string of appearances in the build up to the 2015/16 season in the Kings of the North competition. A confident and assured presence, Connon has represented the North of England U16 and Ireland Clubs U18s sides as well as playing for Ireland at both U18 and U20 levels. Connon played for Ireland Under-20s in the final of the 2016 Junior World Championship, going on to make his Falcons first team debut in the European Challenge Cup at Ospreys in October of that year. The 2018-19 campaign began with him helping the Falcons to the final of the World Club 10s in Mauritius, Connon going on to make his Heineken Champions Cup debut away to Edinburgh. The fly-half kicked the winning penalty away to Wasps in Premiership action, and helped the Falcons reach the final of the A-League with his accurate goal-kicking. Helping Newcastle to promotion during the unbeaten 2019-20 season, he became a Gallagher Premiership regular in 2020-21 with a string of assured performances, including setting a record as the first Falcons player to kick seven conversions in a Premiership game (v London Irish in May 2021). The 2021-22 campaign again saw Connon contributing strongly in his 19 appearances, including scoring a try and kicking seven from seven in the 45-10 Premiership win away to Worcester Warriors.