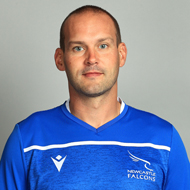 A former Falcons academy player, Mark joined the coaching staff in 2006 looking after the junior players and took up the position as Academy Manager in January 2012 as part of a major shake-up of the academy system. A level 4 coach, Mark has led the Falcons sevens team to victories at the Middlesex Sevens and J.P. Morgan Premiership Sevens Series in recent years as well as developing the likes of Mark Wilson and current captain Will Welch