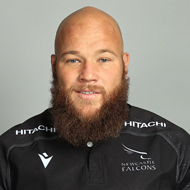 South African Kyle Cooper arrived at the Falcons in the summer of 2016 from South African Super Rugby side, the Sharks - initially joining as hooker before switching to loose-head prop from the 2020-21 season onwards. A former South Africa Under-20s international who has played understudy to Springbok greats John Smit and Bismarck du Plessis, Cooper is renowned for his strong scrummaging and ball-carrying ability. During his time with Natal Sharks he has made 52 Currie Cup appearances, helping the province to four finals and two titles as well as playing a further 48 times in Super Rugby. Making his Falcons debut from the bench at Grenoble in January 2017, he played seven times during the 2016-17 Premiership season, scoring a try in the home win over Northampton. An outstanding 2017-18 campaign saw Cooper earning a place in the Premiership Dream Team, making more turnovers and beating more defenders than any other hooker in the league as he dotted down four tries in his 16 Premiership outings that year. Continuing his progress in 2018-19, he was among the try-scorers in the memorable Heineken Champions Cup away victory over Toulon. The 2019-20 season saw Cooper helping the Falcons to promotion as well as enjoying a loan spell with Exeter Chiefs, helping them to the Premiership title. Returning to the Falcons for 2020-21, Cooper's successful transition to prop saw him appearing 16 times.