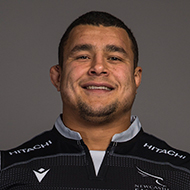 Sam Lockwood joined the Falcons in the summer of 2016 from Jersey after three years on the Channel Island. Named in the 2015-16 RFU Championship Dream Team for the second season running, the renowned scrummager came through as a professional with Yorkshire Carnegie, having gained his England Students cap while at Leeds Met University. Impressing during his early appearances in 2016-17, Lockwood's debut season in Newcastle was cut short by a serious Achilles injury. Returning to fitness during the 2017-18 season, Lockwood became a mainstay on the loose-head side of the Newcastle scrum, making 13 Premiership appearances and also featuring in the club's surge towards the semi-finals of the European Challenge Cup and Anglo-Welsh Cup. Continuing his progress in 2018-19, Lockwood was also forced into an unlikely start at tight-head prop during the Heineken Champions Cup trip to Edinburgh.