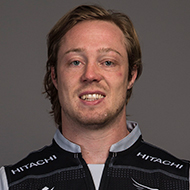 A Newcastle native who came through the Falcons’ academy and represented England at Under-19s level, Hodgson rejoined the club in the summer of 2016 after a two-year spell away which saw a season at both Northampton Saints and Yorkshire Carnegie. Able to play at either fly-half, full-back or scrum-half, the former Royal Grammar School pupil helped the Falcons to the 2012-13 RFU Championship title and the 2012 Premiership 7s crown. Making his first-team debut for the Falcons as an 18-year-old, his fearless attacking game saw him playing in all but one of the club's 22 league games during 2016-17, scoring tries in Premiership victories over Northampton and Bristol. Making a further 19 Premiership appearances in 2017-18, including 10 starts, Hodgson also featured heavily in cup action in another hugely effective campaign. Impressing during the early stages of the 2018-19 with starts in the Heineken Champions Cup wins over Toulon and Montpellier, Hodgson's season was cut short by a broken leg sustained at Harlequins, returning in time for the last game of the season against Bristol. Helping the Falcons to promotion in 2019-20 and playing 12 times the season after, Hodgson signed a one-year contract extension in the summer of 2021.