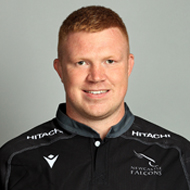 Local lad Trevor Davison joined Newcastle Falcons in the summer of 2017 from Blaydon RFC, for whom he made over 100 appearances. Representing England Counties on multiple overseas tours, Davison developed under the wing of Falcons legend Micky Ward during his time at Blaydon, before stepping up to the professional arena. Working as a beer delivery man prior to his first foray into the professional game, the Denton Burn native joined Blaydon at the age of 11 and played all his rugby there before signing for the Falcons. Making 23 first team appearances in his debut season, 13 of which came in the Premiership, Davison was part of the Falcons side which defeated Northampton in front of a club record crowd of 30,174 at St James' Park. Continuing his progress with another assured season in 2018-19, the Newcastle native started in the Champions Cup home games against Edinburgh and Toulon. Helping the Falcons to promotion in 2019-20, Davison's supremely consistent form continued as he scored two tries in 17 appearances during 2020-21, making his England debut from the bench in July 2021 in the home victory over the USA. Davison was part of England's training squad in June 2022 ahead of their summer tour, having scored two tries in his 22 appearances for Newcastle during the 2021-22 campaign.