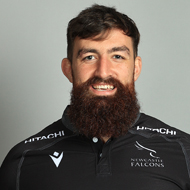 Flanker Gary Graham joined Newcastle Falcons in the summer of 2017 from Championship club Jersey Reds, for whom he made 40 appearances during his two-and-a-half seasons on the Channel Island. A former Scotland Under-20s international who played previously for Gala RFC and Carlisle RFC, Gary is the son of Newcastle Falcons' title-winning prop and Scotland international George Graham. A breakthrough season in 2017-18 saw Graham scoring a try on his senior debut at home to Dragons, earning a place in the England training squad for the Six Nations before a neck injury in the build-up to their opening game denied him the opportunity of winning a first cap. Switching international allegiance back to Scotland, he made his full international debut during the 2019 Six Nations, helping the Falcons to promotion during the 2019-20 season and appearing for Scotland during the 2021 Six Nations.