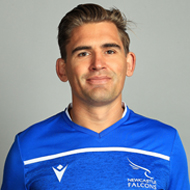 Academy graduate Toby Flood returned for a second spell at Newcastle Falcons in the summer of 2017, having spent three seasons at French giants Toulouse, and in the summer of 2021 swapped playing responsibilities for a new role as skills and kicking coach. Playing his junior rugby for Alnwick and Morpeth rugby clubs, Flood studied at King’s School in Tynemouth and Northumbria University. Making his Premiership debut for the Falcons back in 2005, Flood played 71 competitive games for the club over four seasons. Running out 119 times during his six seasons at Leicester, where he became club captain and won three Premiership titles, Flood made 59 appearances for Toulouse during his three seasons in France. At international level Flood played for England Under-20s, and made 60 full international appearances. These included the 2007 Rugby World Cup final, before his move to France in 2014 made him ineligible for further selection. Flood's first season back at Newcastle in 2017-18 brought 13 Premiership appearances including a try in the home win over Bath, and a try in the away win over Bordeaux in the European Challenge Cup. In 2018-19 he stepped up to captain the side on occasion, scoring the Falcons' crucial try at St James' Park in the home win over Sale Sharks and earning man-of-the-match honours in the home win over Worcester in another try-scoring showing. Helping the Falcons to promotion in 2019-20, Flood appeared nine times during 2020-21, scoring a last-minute winner against eventual semi-finalists Sale Sharks.