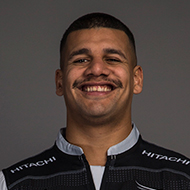 Joel Matavesi joined Newcastle Falcons in the summer of 2017 from Redruth RFC in Cornwall. Formerly an academy player with Exeter Chiefs and Ospreys, he arrived at the Falcons at the same time as older brother Josh. Joel was born and raised in Cornwall, his father having been a Fijian international who came to settle in England, Joel's first season in Newcastle seeing him playing in the 2017-18 A-League semi-final before helping the Falcons to the final the following year.