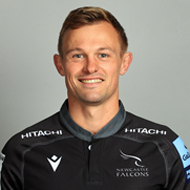 The Cheltenham-born scrum-half joined Newcastle Falcons in the summer of 2017. An England international at Under-16s, 18s and 20s level, Stuart was part of Harlequins' academy before joining near neighbours Richmond. Stuart made 10 Premiership appearances in his debut season with the Falcons, three of which were starts, and also helped the club reach the final of the 2018 World Club 10s in Mauritius. Making four starts during 2018-19 and featuring regularly from the bench, Stuart renewed terms with the club in the summer of 2019 for another two seasons. Helping the Falcons to promotion in 2019-20 and scoring four tries in 12 games during 2020-21, Stuart signed a new two-year deal in the summer of 2021 and played five times in 2021-22, missing much of the campaign with a foot injury.