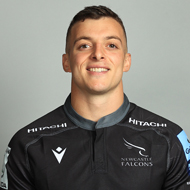 Winger Adam Radwan re-joined the Falcons' senior academy in the summer of 2017 after a string of impressive performances for the A-Team and in the Premiership 7s. The former Billingham RFC, Middlesbrough RFC and Hartlepool Sixth Form College man is renowned for his pace and finishing ability. A star for the Falcons in the 2016 Singha 7s, Radwan spent the back part of the 2016-17 season with National One Club Darlington Mowden Park, having made his Falcons first team debut in the Anglo-Welsh Cup trip to Saracens. Radwan's progress continued during the 2017-18 campaign, during which he won the Anglo-Welsh Cup Breakthrough Player Award. His pace and evasive running saw him as the top try-scorer during the European Challenge Cup, including back-to-back hat-tricks against Enisei-STM. Radwan made his Premiership debut during 2017-18, capping off a memorable year by winning Falcons' Academy Player of the Season and helping the Falcons to the final of the World Club 10s in Mauritius. During 2018-19 Radwan scored his first Premiership try during the away game at Bristol, and also scored his first Heineken Champions Cup try away to Edinburgh. Helping the Falcons to promotion during the 2019-20 campaign with a string of eye-catching tries, he continued his progression with seven tries in 11 games during the 2020-21 season, earning a call-up for England's 2021 summer internationals. Taking his opportunity with both hands he scored a hat-trick on his England debut against Canada in July 2021, earning the fans' man of the match in the process, and going on to to be invited to further England training squads during the 2021-22 season.