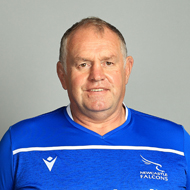 Dean Richards was appointed Newcastle Falcons director of rugby in the summer of 2012 following three years out of the game. Having won four Premiership titles and two Heineken Cups with Leicester Tigers as well as guiding Harlequins to promotion back to the top-flight at the first attempt, Richards brought with him a wealth of top level coaching experience. Often regarded as England’s best ever Number Eight, Richards remains one of the most recognisable figures in the English game and immediately set about laying the foundations for a new era of rugby at Kingston Park Stadium. His first season at the helm saw the Falcons bounce back up to the Aviva Premiership at the first time of asking after an almost unbeaten one-season run in the RFU Championship. In the seasons that followed Richards laid out his vision for the on-field future of the Falcons, and has since set about developing a coaching and playing squad capable of delivering the exciting and entertaining brand of rugby he aims to bring to the North East. The 2017-18 campaign saw Richards winning the Premiership director of rugby of the season award after steering the Falcons to a 20-year-high finishing position of fourth, also reaching the semi-finals of the European Challenge Cup and Anglo-Welsh Cup. Richards was rewarded for this success with the awarding of a new three-year contract.