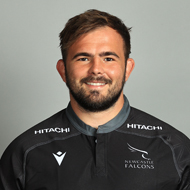 George McGuigan rejoined Newcastle Falcons for a second spell in the summer of 2018, having spent two seasons with Leicester Tigers. A former Ireland Under-20s international on ancestral grounds, McGuigan began his rugby journey with his local club, Darlington RFC. He became the first graduate of the Falcons’ AASE programme to play for Newcastle’s first team, making 69 appearances over three years during his first stint at the club, of which 53 came in the Premiership. Playing for England Saxons in 2016, McGuigan made 28 appearances in his first season at Leicester Tigers, suffering a neck injury during his second year at Welford Road before returning to his native North East. Impressing in his first season back with his home club, McGuigan was a first team regular and became co-captain for the 2019-20 promotion season. The 2020-21 campaign saw McGuigan becoming a mainstay of the side, scoring seven tries in his 19 appearances, but it got even better the year after with an incredible 18 tries in 27 games during 2021-22. The hooker earned a spot in the Premiership Dream Team for his efforts, and was part of the England training squad ahead of their summer programme.