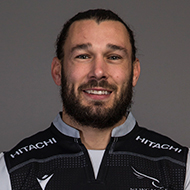 Tom Arscott joined Newcastle Falcons from French club Rouen in the summer of 2018. Prior to his arrival on Tyneside the Plymouth-born back scored 29 tries in his 104 Premiership appearances, playing predominantly at wing and full-back but with the ability to also slot into the centres. At Rouen Arscott played under the tutelage of Richard Hill, the man who was at the helm when he made his Premiership debut for Bristol back in 2007. Upon departing Bristol Arscott went on to play top-flight rugby with Worcester Warriors, London Welsh and Sale Sharks, ending the 2016-17 season on loan with Yorkshire Carnegie before spending 2017-18 in France. The 2018-19 season saw Arscott featuring at wing and full-back, also playing for the A-Team en-route to the A-League final.