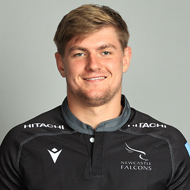 Back-rower Rob Farrar was promoted into the Falcons' senior academy in the summer of 2018, having shone in the junior academy. The West Cumbrian was capped by England at Under-18s level, making his Falcons A-Team debut while still playing for an all-conquering Sedbergh School team which won the Rosslyn Park 10s and Sedbergh 7s. Farrar featured strongly for the Falcons A-Team which reached the final of the 2018-19 A-League, and was an unused replacement for the first team in their Premiership Rugby Cup trip to Harlequins that same season. Scoring on his first team debut against Hartpury during the 2019-20 promotion season, Farrar was capped by England at Under-20s level and made his Premiership debut for the Falcons during 2020-21.