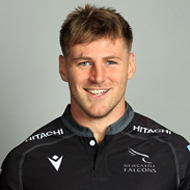 Tom Marshall joined the Falcons' senior academy in the summer of 2018. A member of the Falcons' AASE scheme at Gosforth Academy, he helped them to two successive national AASE finals as well as representing England Under-18s. The former Blyth RFC player appeared for the Falcons in their 2017-18 A-League semi-final while still at school, and is known for his intelligent play and work ethic. Switching international allegiance to Scotland and representing them at the 2019 World Rugby U20 Championship in Argentina, the open-side made his Falcons first team debut in October 2018 when he started in the Premiership Rugby Cup draw with Exeter Chiefs, as well as featuring the A-Team which reached the 2019 A-League final. Marshall featured three times for the Falcons during the 2020-21 season, making his Premiership debut away to Exeter Chiefs in May 2021. He scored a try away to Harlequins during his first Premiership start in March 2022, going on to spend that summer in New Zealand with the Dunedin-based Green Island Grizzlies.