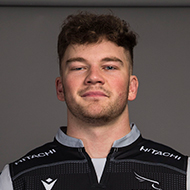 Cumbrian back-rower Will Montgomery was promoted to the Falcons' senior academy in the summer of 2018, having shone in the junior academy. An England Under-18s international, Montgomery represented the Falcons in the A-League while still studying at Kirkbie Kendal School, the same institution which bred Falcons stalwart Mark Wilson, and has also played senior rugby for Kendal RFC. Representing England Under-19s in the spring of 2019 in their away win over Wales, Montgomery made his first team debut in February 2019 during the Premiership Rugby Cup win over Sale Sharks. Part of the Newcastle squad which earned promotion in 2019-20, he made three first team appearances in 2020-21.