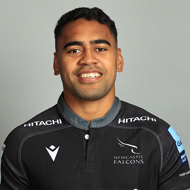 Cameron Nordli-Kelemeti was promoted to the Falcons' senior academy in the summer of 2018. Born in Fiji and playing his very first rugby with LDS Primary School in the capital, Suva, he moved to England to attend Terrington Hall Prep School in York, before moving to Durham School to complete his A-Levels. Impressing in a number of back-line positions with his elusive running, Nordli-Kelemeti has specialised at scrum-half upon his move into the senior academy, having represented England Under-18s. Nordli Kelemeti is also a dab hand on the sevens scene, playing for England in the Junior Commonwealth Games in 2017. As well as helping the Falcons to the final of the A-League in his debut season in 2018-19, Nordli-Kelemeti also made his first team debut away to Harlequins, coming on from the bench. Helping the Falcons to promotion in 2019-20, he spent the majority of the 2020-21 campaign on loan at Championship side Jersey Reds before returning and making 24 appearances during 2021-22.