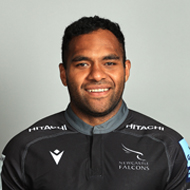 Centre George Wacokecoke is an England Students international who originally combined his rugby at Newcastle Falcons with his studies at Northumbria University before graduating in the summer of 2019. He formed part of the Falcons squad which reached the final of the 2017 Premiership 7s, featured for the Falcons team which reached the A-League final and made his first team debut in the Premiership game at Gloucester in May 2019. A mainstay of the 2019-20 promotion team, Wacokecoke took that form into the 2020-21 season, during which he scored four tries in 18 games, earning a new three-year contract. Playing 22 times during 2021-22, Wacokecoke is equally at home or centre or on the wing.