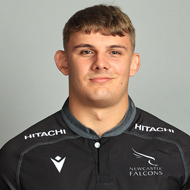 Morgan Passman was promoted to the Falcons' senior academy in the summer of 2018, having risen through the ranks. The Yarm RFC and Egglescliffe School product helped the Falcons' AASE team to two national finals, coming through the Durham DDP pathway and making his A-League debut while he was still at school. Passman spent the 2018-19 season on dual-registration with Tynedale, where he became the top try-scorer in National Two North, before continuing his hot streak in National One with Darlington Mowden Park. He made his first team debut from the bench away to Leicester Tigers in spring 2021, and scored for the Falcons' XV in their victory over England Under-20s.