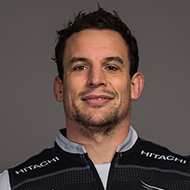 Back-row forward Hardie joined the Falcons in October 2018, initially on a short-term deal until the end of the 2018-19 season before agreeing terms on a two-year contract extension. Born and raised in New Zealand, Hardie grew up on the family farm in Dipton, Southland, playing his early professional rugby with Southland's provincial team before making his Super Rugby breakthrough with the Highlanders. Renowned for his foraging at the breakdown and his defensive big hits, Hardie left New Zealand to link up with the Scotland national team for the 2015 Rugby World Cup, earning man of the match honours against Samoa at Newcastle's St James' Park. Signing up with Edinburgh that year, he played 22 Pro 14 games and a further seven in Europe before joining up with the Falcons after a pre-season with French giants Clermont.