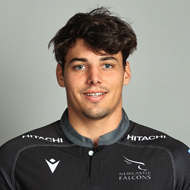 Back-row forward Josh Basham joined Newcastle Falcons towards the end of the 2018-19 season, combining his professional contract with an economics degree at Durham University. The Buckinghamshire-born forward was a pupil at Wellington College, whom he helped win three Daily Mail Trophy finals. An England Under-18s captain who played for England Under-20s in the 2018 Junior World Championship final against France, Basham is a product of the London Irish academy who missed the 2019 Under-20s Six Nations due to ankle surgery. Basham went to the World Rugby U20 Championship in Argentina in the summer of 2019, but had his tournament cut short by injury. Making his Premiership debut during the 2020-21 season, Basham scored his first Falcons try during that campaign in the European Challenge Cup victory away to Castres, earning promotion into the first team squad in the summer of 2021.