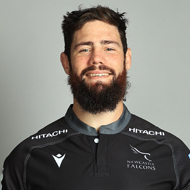 Greg Peterson joined Newcastle Falcons in the summer of 2019 from French club Bordeaux-Begles. Born and raised in Australia, Peterson spent three seasons with Glasgow Warriors, also enjoying a short stint with Leicester Tigers during the 2014-15 season. His 6 foot 8 frame makes Peterson a formidable target at line-out time, with the American international equally abrasive in general forward play. The lock arrived after the 2019 Rugby World Cup and helped the Falcons to promotion in his first season, going on to become a rock solid member of the pack during the 2020-21 Premiership. In 2021-22 Peterson remained a regular for the Falcons, playing 24 times and taking himself past the 50-appearance mark.