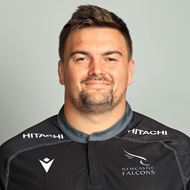 Mark Tampin joined Newcastle Falcons in the summer of 2019 from Ealing Trailfinders. Born in London but beginning his professional rugby career in Yorkshire, tight-head Tampin was in the Leeds Carnegie academy before making his name as a regular for Rotherham.Moving to Jersey in 2016, Tampin spent two seasons with Ealing before earning his switch to the North East. Helping the Falcons to promotion in 2019-20, Tampin made his Premiership debut in 2020-21, playing 17 times that season and earning a new two-year deal. An extremely consistent performer on the tight-head side, Tampin played 23 times during 2021-22, taking himself past the 50-appearance mark.