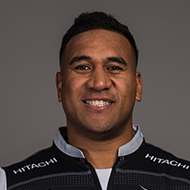 Cooper Vuna joined Newcastle Falcons from Bath in the summer of 2019. A former rugby league player who made his NRL debut for New Zealand Warriors at the age of just 17, Vuna was born and raised in Auckland and is the son of former Tongan rugby union international, John Vuna. Moving to NRL side Newcastle Knights in 2007 and scoring 35 tries in his 54 appearances, Vuna played international rugby league for Tonga before switching codes to join Super Rugby franchise Melbourne Rebels, for whom he scored 13 tries in 36 outings. Earning two caps for Australia, he spent two seasons with Toshiba Brave Lupus in Japan before joining Worcester Warriors, spending a year and a half with Bath where he made 16 Premiership appearances prior to joining Newcastle.