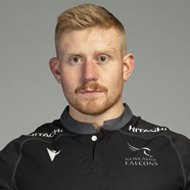 Conrad Cade joined Newcastle Falcons' senior academy in the summer of 2019. Born and raised in County Durham, the loose-head prop had previously featured for the Falcons’ A-Team while studying at Leeds Beckett University. Cade represented Leeds Beckett in the BUCS Super Rugby final at Twickenham, and represented England Students against France Students in 2019. Conrad spent the majority of the 2020-21 season on loan at Doncaster Knights, earning positive reports for his contribution on the loose-head side.