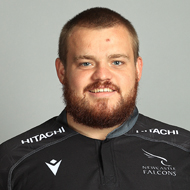 Oscar Caudle joined the Falcons' senior academy in the summer of 2019 after graduating through the system. Previously studying at Gosforth Academy on the Falcons’ AASE Scheme having moved there from QE Hexham, Oscar has played tight-head prop for his native Tynedale RFC 1st XV at the age of 18 and was a member of the Falcons’ A-Team squad which reached the Premiership Shield final in May 2019. He combines his rugby with study as an academy scholar.