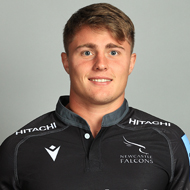 Will Haydon-Wood joined the Falcons' senior academy in the summer of 2019 after graduating through the junior academy. Will was part of the Sedbergh School team which won back-to-back Rosslyn Park 7s titles. He was a stand-out performer for the Falcons in the Under-18 League and represented England Under-20s against South Africa in the spring of 2019, having toured South Africa with the Under-18s the previous summer. Will also started for England Under-19s in their away win over Wales Under-19s in early 2019. Making his first team debut during the European Challenge Cup victory away to Castres in December 2020, his Premiership debut followed in May 2021 away to Exeter.