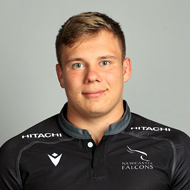 Freddie Lockwood joined the Falcons' senior academy in the summer of 2019. A former Barnard Castle School pupil and back-five forward, Freddie has played junior club rugby at Darlington Mowden Park RFC. He played for England Under-19s against Wales in spring 2019 after a series of strong performances for the Falcons’ Under-18 team, and made his Falcons' first team debut in their away win over Castres during the 2020-21 European Challenge Cup.