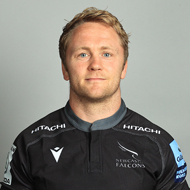 Having originally joined the Falcons while attending Barnard Castle School, versatile back Alex Tait made his Falcons Academy debut in the Langholm Sevens in the Scottish borders, where he helped the Falcons to victory. After scoring a hat-trick on his first team debut at Spanish champions Cetransa El Salvador in January 2008 Tait, who had previous played for England Under 18s a year young in 2005, went on to help England Under 20s to a Six Nations Grand Slam and to the final of the IRB Under 20s Junior World Championships. Making his name as a first team regular during the subsequent seasons, Tait led the team out away to Jersey in November 2012 where he made his 100th appearance for the club. The Falcons’ return to the Premiership provided positive for Tait, the Full Back scooping both Players’ Player of the Year and the Ken Lockerbie Trophy for most consistent appearances at that term’s end of season awards ceremony. Despite beginning the following season with an injury, Tait went on to appear 23 times for the Falcons during 2014/15, scoring four tries in the process and confirming midway through that season that he had signed for a further two years with his boyhood club. In 2015-16 he was a similarly consistent performer, making 18 Premiership starts and scoring in February’s home win over Northampton. The 2016-17 campaign saw him scoring the winning try in an away victory at Gloucester, Tait going on to lead out the side in honour of his 200th appearance when the Falcons hosted the same side in April 2017. Another typically consistent season in 2017-18 saw Tait grabbing the Falcons' first and last tries of the campaign at home against Worcester and away to Exeter, making 23 first team appearances in the Falcons' best season in 20 years. The long-serving back was granted a testimonial season during the 2019-20 campaign, helping the Falcons to promotion back into the Premiership, and played his 250th game for the club away at Leicester during the spring of 2021.