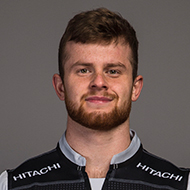 Callum Pascoe joined the Falcons' senior academy in the summer of 2019, having shone for the junior academy and on the club's AASE scheme. The South-Shields-born scrum-half joined the Falcons’ AASE Scheme at Gosforth Academy from Harton Technology College and Westoe RFC. He toured South Africa in the summer of 2018 with England Under-18s, and as well as featuring in the Falcons' Under-18s team for two seasons he made his A-Team at Doncaster Knights and Northampton Wanderers in early 2019.