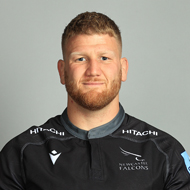 Hexham-born hooker Charlie Maddison joined Newcastle Falcons in the summer of 2019 from Jersey Reds. Playing his junior rugby with Tynedale before moving to Darlington Mowden Park, Maddison spent three seasons with Rotherham Titans. The last of those saw the front-rower promoted to club captain, earning a move to Jersey Reds for the 2018-19 season. Maddison featured in all but four of Jersey's 22 Championship games during that campaign, impressing enough to earn a contract at Kingston Park Stadium. Helping Newcastle to promotion in his first season, Maddison made his Premiership debut during the 2020-21 season, after which he signed a new three-year contract.