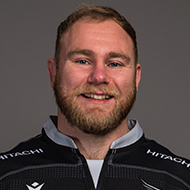 Prop-forward Mike Daniels joined the Falcons in the summer of 2019 from Championship club Nottingham. During the 2018-19 season Daniels was loaned from Nottingham to Wasps, where he played in the Premiership against Saracens. Born in Reading, the front-rower was a member of Bath's academy prior to studying at Loughborough University, going on to make 35 first team appearances in three seasons for Worcester Warriors. Spending the 2017-18 season with Hartpury, Daniels moved to Nottingham in 2018-19 and made seven Championship appearances as well as earning his loan spell at Wasps.