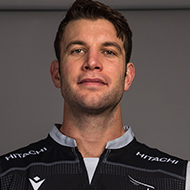 Italian international Marco Fuser joined the Falcons in the summer of 2020 from Italian side, Benetton Treviso. Fuser played 119 times during his eight seasons with Treviso, including 22 Heineken Champions Cup games and a further 87 Pro14 appearances. Making his international debut in 2012, the lock had played 33 times for his country when he first joined the Falcons. Marco's first season with the Falcons saw him scoring two tries in 12 games - both tries coming against Wasps.