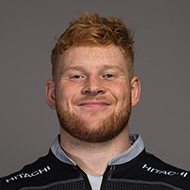 Robbie Smith joined Newcastle Falcons from Bedford Blues in the summer of 2020. The hooker began his rugby journey with his local club, Newton Stewart, going on to join Ayr RFC at the age of 17. Earning a full-time contract with Glasgow Warriors' academy, he spent three seasons with the club, representing Scotland at Under-16s, 18s and 20s levels. Captaining his country during the second of his two seasons at Under-20s, Smith spent the 2019-20 season in the English Championship with Bedford Blues, impressing in their home game against Newcastle. Smith made his first team debut for the Falcons away to Exeter in May 2021, having helped a Falcons XV defeat England U20s earlier in the season.