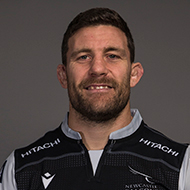 The Kendal native has been with Newcastle Falcons in one form or another since the age of 14, and was named club captain in the summer of 2020. A former pupil at Kirkbie Kendal School who played for local clubs Kendal RFC and Penrith RFC during his youth, Wilson had to work for his full-time contract with the Falcons after spending time playing for Blaydon RFC while studying at Northumbria University. Eventually earning his professional breakthrough with the Falcons, the hard-working Cumbrian rapidly racked up the appearances, passing the 200 mark for the club during the 2018-19 season, which saw them reaching their first Premiership semi-final. Making his England debut on tour to Argentina in 2017 having already impressed in non-cap action against the Barbarians, Wilson followed up the season after by touring South Africa, and was named Man of the Series in autumn 2018 following another impressive showing. Maintaining his high standards and earning a place on the plane to Rugby World Cup 2019 in Japan, Wilson helped steer England into the final, going on to feature in the showpiece match before spending much of the 2019-20 season on loan at Sale Sharks. Returning to the Falcons as club captain for the 2020-21 campaign, he scored one try in his 12 appearances.