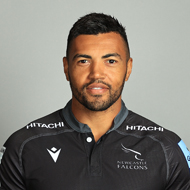 Experienced centre Luther Burrell joined the Falcons in the summer of 2020 from Super League side Warrington Wolves, following a season in the 13-man code. Boasting 150 Premiership appearances and a further 52 in Europe at the time of his arrival on Tyneside, the Yorkshireman won the Premiership title, European Challenge Cup final and Premiership Rugby Cup final during his seven years at Northampton Saints, having previously played for Leeds and Sale Sharks. Making his England debut against France in 2014, Burrell scored four tries in 15 tests, going on to spend 2019-20 in rugby league with Warrington before switching back to union with Newcastle for the start of the 2020-21 campaign. Burrell's first season with the Falcons saw him making 13 appearances, creating a host of tries with his line-breaking and offloading as well as fronting up in defence.