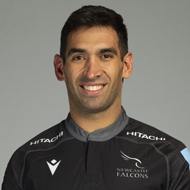 Matias Orlando joined the Falcons in the summer of 2020 from Jaguares. Born in Tucumán and playing his junior rugby with the Hiuirapuca club, Orlando played for Argentina’s Pampas XV in South Africa’s Vodacom Cup competition, making his full international debut in 2012 before rapidly establishing himself as a test regular. Spending four seasons in Super Rugby with the Buenos-Aires-based Jaguares, Orlando scored twice in their 2019 semi-final victory over the Brumbies as they secured safe passage to their first ever final. The midfield man scored a total of 15 tries in his 59 Super Rugby appearances, and played for Argentina during Rugby World Cup 2019 in Japan. Orlando's first season on Tyneside saw him becoming a crowd favourite due to his consistently assured performances, scoring one try in 12 appearances, going on to play eight more times during an injury-interrupted 2021-22 season before being recalled by his country for their 2022 summer programme.