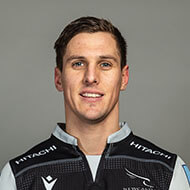 Louis Schreuder joined Newcastle Falcons in the summer of 2020 from South African Super Rugby side, the Sharks. A native of the Western Cape, Schreuder won the first two of his three Currie Cup finals with Western Province, going on to captain Natal Sharks to victory during the 2018 final. Boasting more than century of Super Rugby appearances for the Sharks, Southern Kings and Stormers, the vastly-experienced link man has also played for Japanese club Kubota Spears, and impressed during a spell at French giants Toulon in 2019. Schreuder made 18 appearances in his first season with the Falcons during 2021, scoring his first try for the club in the home win over London Irish.