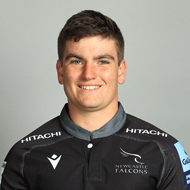 James Blackett was promoted into the Falcons' senior academy in the summer of 2020, having come through the junior academy system. He has played junior rugby with RGS Newcastle, Morpeth RFC, Alnwick RFC and Northumberland County as well as the Falcons Academy. A prolific goal-kicker also capable of playing fly-half, he helped RGS Newcastle to win the coveted St Joseph’s Festival in 2019, and also played some senior men’s rugby for Alnwick RFC during the 2019-20 season.