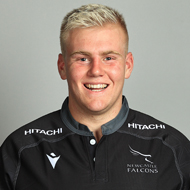 Phil Brantingham was promoted into the Falcons' senior academy in the summer of 2020. He played his junior rugby for RGS Newcastle, Morpeth RFC, Northumberland County, the Falcons Academy and England Under-18s. He also played rugby league for Cramlington and Newcastle Thunder on a dual-academy pathway until the age of 17, when he chose to focus on rugby union. Capped by England Under-20s, a knee injury saw him rules out of the closing stages of the 2021 U20 Six Nations, having impressed in the early rounds.