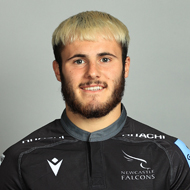 Iwan crossed codes to join the Falcons' senior academy in the summer of 2020, signing from Super League side Leeds Rhinos. Rugby union runs in the Stephens family, however, with Iwan's father Colin being a former Welsh international fly-half who famously kicked Llanelli to victory over then world champions Australia back in 1992. Colin's playing career eventually took him to Leeds Tykes, with Iwan growing up playing both codes before specialising in rugby league with the Rhinos, prior to his Falcons move.