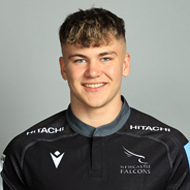 Matthew Ward joined was promoted into the Falcons' senior academy in the summer of 2020. The winger is a graduate of the Falcons’ AASE programme at Gosforth Academy, having also played for Park View School, Durham City RFC, Durham County, the Falcons Academy and England Under-18s. A natural finisher, Matthew showed consistent try-scoring ability at schools and academy level. He also scored a try against Medicals in his first game of senior rugby for his hometown club Durham City RFC, when he was just 17.