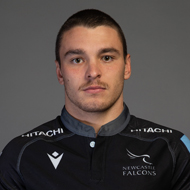 Jinking winger Mateo Carreras joined Newcastle Falcons in December 2020 from Jaguares. The former Argentina Under-20s star has also represented his country on the international 7s stage, and is renowned for his pace and quick footwork. Carreras' debut season saw him making five first team appearances, his eye-catching runs and hard defensive hits earning him a call-up to Argentina's full touring squad in July 2021. He made his Pumas debut during the 2021 Rugby Championship, going on to score against France and Ireland during the November 2021 test window. Carreras played 12 times for the Falcons during the 2021-22 campaign, scoring twice.