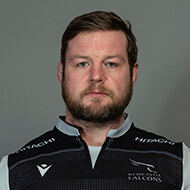 Prop-forward Jon Welsh re-joined Newcastle Falcons for a second spell in January 2021. His first stint at the club saw him arriving in the autumn of 2015 following the Rugby World Cup, making 57 appearances and scoring two tries over four and a half seasons. Welsh has been capped 12 times for Scotland between 2012 and 2018, making his professional breakthrough with Glasgow Warriors in 2008 and going on to play more than 100 times for the Scotstoun side before heading to the Falcons. Welsh helped Glasgow to win the Pro 12 title back in 2015, beating Munster in the final.