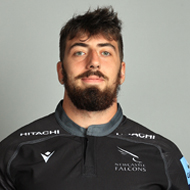 Matthew Dalton joined Newcastle Falcons in the summer of 2021. A former international pentathlete in his youth for Ireland Schools, he was also an adept goalkeeper in football but opted to pursue rugby as a career, earning a professional contract with Ulster. Making 10 first team appearances for Ulster, the former Malone RFC man brings pace to the game from his athletics background, where high jumping and hurdles were among his stronger events. Having played the majority of his rugby in the second row, he is also capable of playing in the back row. Dalton played twice for the Falcons during 2021-22 before going on to play club rugby in Australia during the summer of 2022.