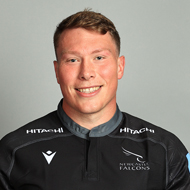 Irish prop Conor Kenny joined Newcastle Falcons from Connacht in the summer of 2021, having made 11 appearances for the province. The former Ireland Under-18s, 19s and 20s international is a native of the Buccaneers club in Athlone, and plays on the tight-head side. Making his Falcons debut in September 2021 during the pre-season victory at Glasgow, Kenny suffered a neck injury which kept him out for most of the 2021-22 season, coming back to make his Premiership debut away to Northampton in June 2022.