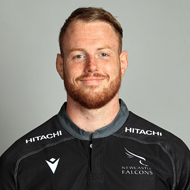 George Merrick joined Newcastle Falcons in the summer of 2021 from Worcester Warriors. The Carshalton-born player is a former England Under-20s player who won the age-group Six Nations title in 2012, going on to make his senior debut for Harlequins the following year. Merrick made 100 appearances for Quins before being signed by French giants Clermont in 2020 – playing 11 times in his season with Les Jaunards before moving to Worcester for the 2020-21 campaign.